Christmas lessons are usually quite popular in language schools with students at all levels. A beginner enjoys the new terms, which undoubtedly include words such as "jmelí (mistletoe)", "vánočka (Christmas cake)" or "cukroví (Christmas sweets)", the advanced student can take advantage of the full range of his vocabulary and talk about the traditions and customs of his native country. The lecturer is satisfied that the lesson is carried out in a pleasant and sometimes even festive spirit and there is no need to stress out over the grammatical phenomena of the Czech language. So much for the theory ... but as experience has shown, the reality is different. 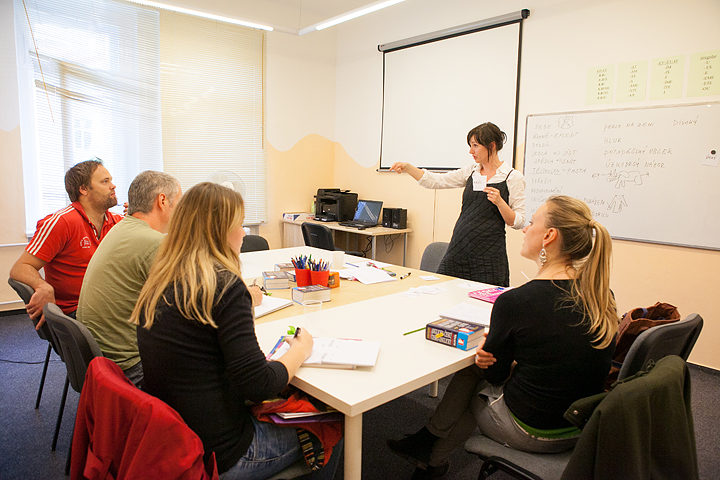 Take a purely hypothetical lesson in which the lecturer starts with a casual conversation about the traditions and customs of Christmas within the students' native countries, the lesson continues with vocabulary delivered through pictures, follows with a practical demonstration of Czech traditions and concludes by listening to Czech Christmas carols. It seems simple - the festive atmosphere is supported by homemade sweets and a little bit of mulled wine – a recipe for guaranteed success, but is it ...?

As the lesson starts students are offered a small refreshment (the most popular is mulled wine, which is greatly welcomed, especially by students from a nameless country in the Nordics) and a question is raised: "How do you celebrate Christmas at your home?" The well-mannered lecturer suddenly discovers that his enthusiasm is not shared by everyone - it turns out that Christmas is not a universally popular holiday (this fact should be, of course, taken into account, but has been forgotten in the pre-Christmas euphoria). It can take only one teenage student in the class, a student, who rejects any traditions on principle, and the painstakingly constructed concept starts to crumble.

Another tough situation is having students with different cultural backgrounds, who simply have nothing to say about this topic, luckily it is an option that one can work with much more easily than that of the striking teenager. After the initial conversation (which was in some cases shorter than intended), the relieved lecturer distributes images for students to connect with the concepts. After a moment of silence when everyone works calmly, a sudden, seemingly innocent question appears: "What is the origin of the word crib?" Several pairs of eyes fixed on the native speaker don´t help much to keep his demeanour...but the situation is saved with a quick explanation, more homemade sweets and more mulled wine.

After the etymological insertion, the practical part of the lesson finally follows; guess the Czech Christmas tradition with clues. These include frankincense, candles in nutshells and a bowl of water, Christmas Francis, slippers, a golden pig, apple and fish scales. Students look interested, examining objects and raising interesting debate. The lecturer is satisfied because the lesson gets finally the right atmosphere - until they realize that the Francis refuses to burn and sniffing frankincense makes one student sneeze.

Never mind, everything is saved by Christmas carols! Choosing the right one was not the easiest task (if one wants to avoid words like "nebožátko (poor thing)", "kožičky", "líčka (cheeks)", "dudlajdá," "rozjímejte (contemplate)", or "salaš (sheep shelter)", he doesn´t have much to choose from).

Eventually the lesson is sprawled by the sound of Neckářová "Midnight“, the majority of participants look happy and some even a little touched. In a festive mood everyone eventually toasts (either symbolically or with wine), wishes each other Merry Christmas and a Happy New Year. Students say goodbye and the lecturer sighs - after all, the last lesson of the year was a success!

Enrolment in Czech for foreigners
At CLT, enrolment in our Czech for foreigners language courses is possible every month. CLT was in 2002 the first to start this approach, which has ...
Intensive holidays in CLT
I am a full-time mum, which means that I work twenty-four hours per day. That´s why every year I look forward to my summer holidays, which I ...
CLŤáček No. 1 / 2014
Dear students, our students have created a large number of unique and entertaining texts, quizzes, recipes, pictures, etc. in our courses of ...
All articles